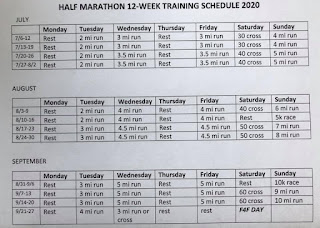 Imagine that! This morning I decided I would make out a half marathon training schedule for the annual Fort4Fitness Fall Festival, and it just so happens that a 12-week plan starts... this week! It must be fate!

I haven't been running so much lately. I don't think anyone has. Almost all races and events have been canceled so far this year due to the COVID-19 pandemic, and I wouldn't be surprised if it continues. It's hard to stay motivated without something to train for. So, I thought even if I have to do it virtually, I need to be training for something.

I had originally registered to run another full marathon on September 26th. I'm kind of glad now it was canceled. I don't know if I could have mustered the energy to train for that. But I figure I can at least do a half marathon. It's not like I care about a finish time. I wouldn't even feel bad walking part of it. I just need something to shoot for.

I use Hal Higdon's training plans, and this year decided to simply do the 'Novice 1' program. I'd rather not get too fanatical about it. I also altered my rest days to better coincide with my long and short days at work.

So, I'm hoping this will help get me out of my running rut. Not that I minded taking some time off. I also think doing more bike work has strengthened my knees and glutes - which I have needed to do. And while I wanted to keep the marathon streak going, it is probably better for me to not always get what I want. As they say, "it is what it is."

"And let us run with perseverance the race marked out for us, fixing our eyes on Jesus, the pioneer and perfecter of faith. For the joy set before him he endured the cross, scorning its shame, and sat down at the right hand of the throne of God. Consider him who endured such opposition from sinners, so that you will not grow weary and lose heart." (Hebrews 12:1b-3)

Posted by dan No comments:

Email ThisBlogThis!Share to TwitterShare to FacebookShare to Pinterest
Labels: running

What I eat and where I sleep 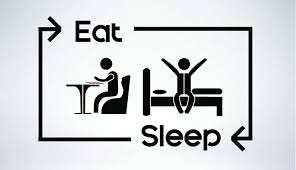 I was going to skip today because... well, Thursdays are tiring days for me, plus... I'm just so fed up with everything. But, alas, I suppose it would do good to distract myself for a few minutes here...

My foods lately (at least during the workweek) have been:
SLEEP

Last night we tried sleeping in the basement again. We have the twin beds pushed together down there from when Isaac & Ricci were here. We slept there once, and then kind of... forgot, I guess. It's much cooler in the basement, and although our whole house is insulated very well, there's nothing like dirt and concrete walls to keep out noise even more. Plus the fact that, with the two twin beds, even though we're technically sleeping together, we don't feel one another move when we roll over or anything. I think it sleeps better. Though I generally sleep like a rock anyway.

So, there ya go. It's Thursday; I just returned from a 50-minute bike ride in 90+ temps; Facebook is sooooo aggravating to me; I'm ready for the weekend. Although, I must say, work hasn't been terrible since my boss is around so seldom.

Peace out; and in.
Posted by dan No comments:

Email ThisBlogThis!Share to TwitterShare to FacebookShare to Pinterest
Labels: food 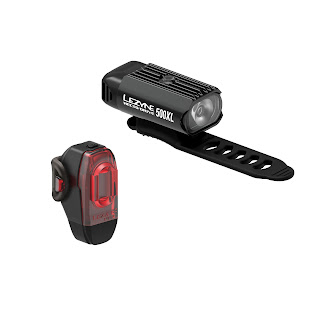 I bought a new set of lights for my bicycle. I got this Lezyne Hecto & KTV Drive Pair at the bike shop inside where I work (from our friend Scott). They are USB rechargeable and at 500 lumens should provide plenty of light for no more than I will likely be riding in the dark. They are small, adjustable, easy to mount and remove, and need no charging cord.

I actually traded the bike lock Drew Carrie got me for Father's Day. I was going to keep the lock because it's much nicer than the ones I have, but when I went to mount it on my bike there wasn't a convenient place to do so. So I traded it even up for these lights - which I needed more.

I had some battery operated lights already, but the headlight isn't bright enough for me to ride where there are no streetlights. I've been wanting to ride to work sometimes but there is a stretch along Airport Expressway that doesn't have lights. At 4:30 am it is pretty dark along there, and since it's a busy road I want to be able to see if there is any debris in front of me.

So this will be good. I'm happy with the deal and appreciate Drew Carrie getting it for me. :)
Posted by dan No comments:

Email ThisBlogThis!Share to TwitterShare to FacebookShare to Pinterest
Labels: bike

Kayaking in the fort 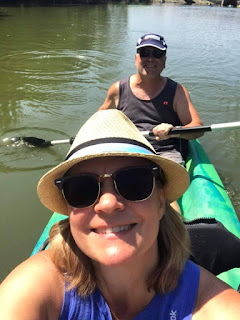 We had our first experience kayaking the rivers in Fort Wayne (or river). I'm not sure which river(s) it was exactly, but we spent 90 minutes on the water and it was pretty fun.

We rented a tandem kayak at Fort Wayne Outfitters. It was easy-peasy. You do everything on your phone and then just show up. A tandem was $30 for 2 hours (single kayaks are $20). We could have stayed out longer, but it was 91f when we arrived at 11:30 am, so we didn't want to push it.

They set us up with life jackets (which we used as back rests) and paddles, and launched us into the river on their nifty dock thing.

The guy at the dock suggested going west was more scenic, but we'd been there on a pontoon boat, so we headed east. We went under the Martin Luther King Jr. Bridge, past Headwaters Park, the Old Fort, The Deck, and wandered around and over to the Tennessee Street bridge, then back. 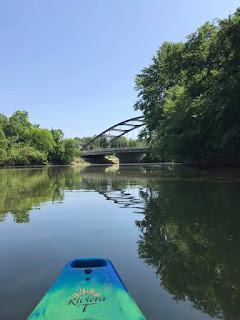 One nice thing about the rivers here is there isn't much of a current any which way you go, so it was pretty easy rowing. In fact, usually only one of us rowed, if either of us did at all. It was relaxing.

There is also plenty of nature to see: ducks, geese, an occasional fish jumping, and plenty of turtles sunning themselves... 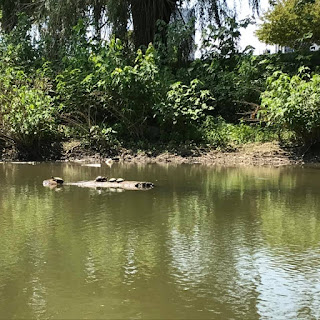 Although it was pretty hot on this day, it was still a worthwhile venture. We will definitely be doing this again. I imagine it's really pretty in the fall. 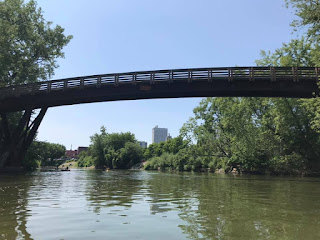 
"...Jesus stood and said in a loud voice, “Let anyone who is thirsty come to me and drink. Whoever believes in me, as Scripture has said, rivers of living water will flow from within them.”" (John 7:37-38)

4th of july fireworks and folks 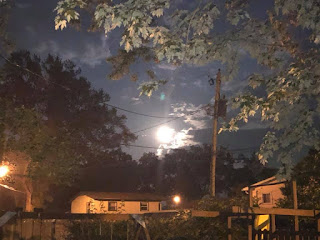 We had no real plans for this fourth of July. That's sort of how life works now. No big events allowed. Yet somehow - despite temps in the 90s yet again - we managed to have a good time anyway.

Saturday morning found us taking our usual weekend bike ride together. We rode through Foster Park and ventured downtown to Promenade Park. One drink at Trubble Riverside (which is still more money than I want to spend) and we made our way back home. Oddly enough it appeared to have rained somewhere in Fort Wayne, but it never did rain on us or at our house. We could have used the shower.

In the afternoon we ventured out to the Feipel farm to visit Carrie and the kids. Drew was singing somewhere and they were getting ready for a family party on Drew's side the next day.

Saturday night is when things got crazy. Most of it was just the two of us in the basement continuing our way through 'Better Call Saul'... but around 10 pm we decided to go outside and take a look at all the fireworks going off.

I don't know if it was because the fourth was on a Saturday, because so many towns cancelled their celebrations, the government stimulus checks, or just virus angst in general... but I HAVE NEVER SEEN OR HEARD SO MANY FIREWORKS GOING OFF IN MY LIFE! Jane commented that it sounded like popcorn popping. All over the city you could see the lights and hear the booms.

Just on our street there were several people setting off quality pyrotechnics - right in the middle of the street. Our neighbors to the left (one house over) have been setting them off regularly for days. This night was no exception. It was the neighbors just to our right that had the best ones though. I took this video of the grand finale going off over our heads (and our house) as we sat in lawn chairs in our driveway. I'm not a big fireworks person, but they were pretty good.


The main thing I noticed, aside from all the fireworks, was the NUMBER OF PEOPLE OUT AND ABOUT. We rarely see anyone in our neighborhood, but there were people sitting outside, and people walking down our street even! That hardly ever happens!

The night was topped off though by the most fantastic full moon. My picture at the top doesn't do its magnificence justice. We eventually walked around the block and probably did more staring at the moon than at all the lights flashing in the sky below it. It was nice.

So, for a non-spectacular plan, we had a pretty good fourth nonetheless.


"When I consider your heavens,
the work of your fingers,
the moon and the stars,
which you have set in place,
what is mankind that you are mindful of them,
human beings that you care for them?" (Psalm 8:3-4)

Posted by dan No comments:

Verse of the Day

"I take no pleasure in the death of the wicked man, but rather in his conversion, that he may be saved." Ezekiel 33:11